Equal Rights for Men and Women in Combat 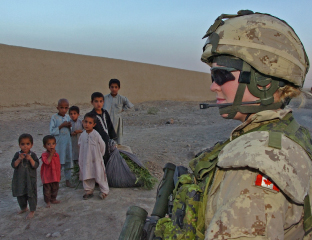 Canada is one of only a few countries in the world that allow women to serve on the front lines in combat. But it was not always so. While women have served in Canada's military since 1885, they were prevented from performing combat roles for over one hundred years.

Four members of the Canadian Forces set out to change this. They believed it was wrong that women were prevented from having roles in combat positions or combat-related jobs, just because they were women.

In 1989, Private Heather R. Erxleben became Canada's first female Regular Force infantry soldier. Since then, hundreds of Canadian women have served in combat roles, and all women have the opportunity to pursue any position in the Canadian Forces.