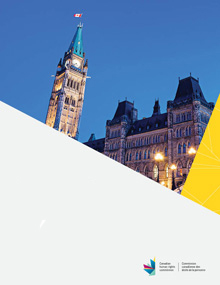 * This publication is only available in electronic format. If you require a paper version, please contact the Commission directly. Please allow 5-8 business days for processing.

This quarterly report has been prepared by management as required by section 65.1 of the Financial Administration Act (FAA) and in the form and manner prescribed by the Treasury Board. It should be read in conjunction with the Main Estimates and Supplementary Estimates. This report has not been subject to an external audit or review.

The Canadian Human Rights Commission (the Commission) was established in 1977 under Schedule I.1 of the FAA in accordance with the Canadian Human Rights Act (CHRA). The Commission leads the administration of the CHRA and ensures compliance with the Employment Equity Act (EEA). The CHRA prohibits discrimination and the EEA promotes equality in the workplace. Both laws apply the principles of equal opportunity and non-discrimination to federal government departments and agencies, Crown corporations, and federally regulated private sector organizations.

Further details on the Commission's authority, mandate and program activities can be found in the Departmental Plan (DP) and Part II of the Main Estimates.

This quarterly report has been prepared by management using an expenditure basis of accounting. The accompanying Statement of Authorities includes the Commission’s spending authorities granted by Parliament and those used by the Commission, consistent with the Main Estimates, Supplementary Estimates and Treasury Board vote transfers for the 2018-19 fiscal year. This quarterly report has been prepared using a special purpose financial reporting framework designed to meet financial information needs with respect to the use of spending authorities.

The authority of Parliament is required before money can be spent by the Government. Approvals are given in the form of annually approved limits through appropriation acts, or through legislation in the form of statutory spending authority for specific purposes.

The Commission uses the full accrual method of accounting to prepare and present its annual financial statements that are part of the departmental results reporting process. However, the spending authorities voted by Parliament remain on an expenditure basis.

2. Highlights of the Fiscal Quarter and Fiscal Year-to-Date (YTD) Results

As reflected in the Statement of Authorities, the Commission’s total authorities available for use have increased by $255,368 (or 1 percent) from $23,453,222 in 2017-18 to $23,708,590 in 2018-19. This represents the impact of an increase in authorities primarily attributable to negotiated salary adjustments and a decrease in the Year End Carryforward obtained from the prior year.

The Commission provides Internal Support Services to certain other small government departments related to the provision of finance, human resources, compensation, procurement, administration and information technology services. These Internal Support Services agreements are recorded as revenues as per section 29.2 of the FAA. When compared to the third quarter of 2017-18, the authorities for revenues netted against the expenditures have increased by $1,100,000 in anticipation of increased services provided to current clients and the addition of a new client.

The Commission continues to experience a significant increase in demand for services, guidance, and expertise on human rights matters. For example, in both 2017 and 2018, the Commission received approximately 4,000 inquiries each year after averaging 2,600 inquiries the previous three years (2014 to 2016).

During the third quarter, the Commission has continued to implement new processes to manage and control this growing volume of work in a more efficient manner.

Parliament and Senate Committees regularly seek the expertise of the Commission on emerging human rights issues and legislation. Many other stakeholders representing vulnerable peoples expect the Commission to speak out on human rights matters and represent the public interest. In a context of stretched resources, these demands create pressures and there is a risk that it could impact service delivery.

The Commission’s case management system is old and creates inefficiencies in the complaints process. This system requires significant investment as the risk of a major failure continues to increase.

There is a risk that the current influx of complaints may limit the Commission’s capacity to provide access to justice in a timely manner and/or advocate for human rights in a preventive fashion. There is also a risk that unexpected emerging human rights issues could divert focus from key priorities and result in the re-assignment of our limited resources.

All other risks are mentioned in the 2018-19 Department Plan.

4. Significant Changes in Relation to Operations, Personnel and Programs

These new laws are adding important new responsibilities to the Commission. The organization continues to devote resources to plan for these new mandates which has immediate impact on the Commission’s capacity to deliver its services.

*Includes only Authorities available for use and granted by Parliament at quarter-end.